This month I joined art teachers from across the state to highlight a group of
talented student artists in a statewide art exhibit.

"Students, grades K through - 12, from across Massachusetts have been selected to have their artwork displayed at the State Transportation Building in Boston. This exhibit, sponsored by the Massachusetts Art Education Association (MAEA), is part of Youth Art Month (YAM), a national celebration held each year during March, that emphasizes the value of art education for all children and encourages support for quality art programs in schools."  - MAEA

Congratulations to these Fuller Meadow and Howe Manning Artists! 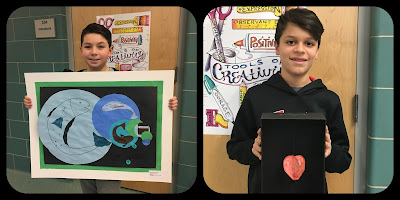 In addition to my 5 students.  Students from Mrs. Smullin's Howe Manning art classes were also represented at the YAM art exhibit, making the count 11 in all!  I was able to celebrate all of these young artists at the family celebration on March 3.  It was a true display of talent and creativity. 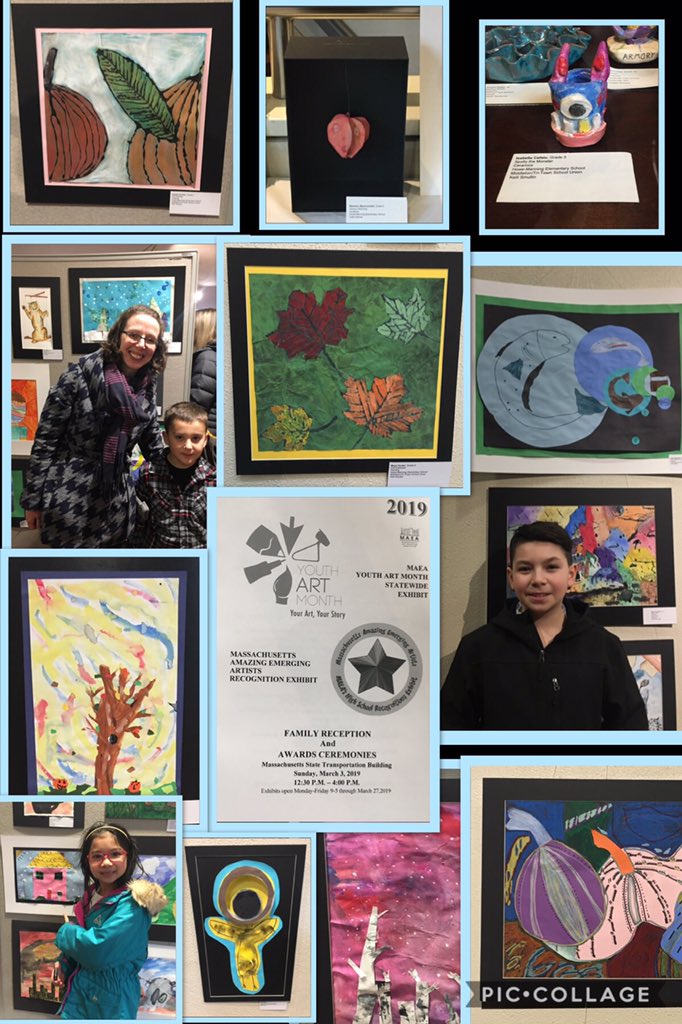 Posted by Catie Nasser at 8:06 PM No comments: 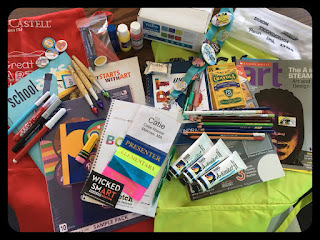 Sessions and Lessons and Swag, Oh My!

Last weekend I attended my first National Art Education Conference in Boston, right in my back yard. I took away so many things from the weekend and I'm about to share them all with you!

There were conference sessions, so many sessions. Here's a few of my highlights. 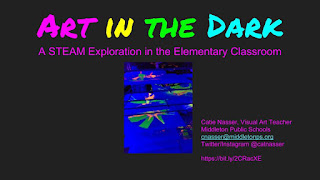 First, I had the amazing opportunity to present on my Art in Dark curriculum.
Thank you to everyone who came out to see me, the house was packed!
I learned a valuable lesson - always bring your own computer cables!

By far the best session on Thursday was Lessons with Maker-Tech Integration,
with Landa Ruen, HS educator from Massachusetts.
At 5:30 I talked myself into staying attending one more session.
Even though I was so drained, I'm so glad I did. 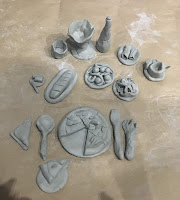 I participated in a "Top Chef" style clay challenge, learned about using sound as an element in art,
and learned about the London Empathy Museum's "Mile in My Shoes Exhibit".
What an incredible way to teach children to connect to others.
Thank you Landa!

My Friday highlight was definitely from Tricia Fuglestad and Janine Campbell and their session: Transdigital Art: Transforming Art Experiences Across Physical and Digital Spaces.
If you don't know about Tricia's blog, Fugleblog - you need to check it out.
I walked away from her session with so many ideas that I can't wait to try using the DoInk Apps.
And that was just from her half of the session! 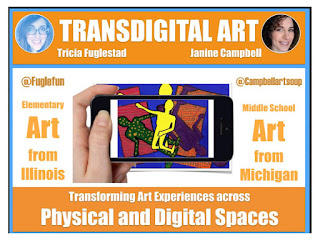 Janine showed me so many ways to create "blended learning" experiences. especially using google forms for self-assessment.  Janine also inspired me to start using Artsonia to create digital portfolios for my students! I can't believe I haven't done it sooner.
If you don't already, you MUST follow both of these amazing women:
Thank you Ladies!


Finally my Saturday highlight was the Someone Who Looks Like Me Session
with South Carolina art teachers Brenda Estella Reyes and Cindy Jesup.
This session was filled with resources to help every student find role models who look just like them.
I loved how these teachers strived to show each and every one of their students how important they are by giving them to tools to feel special and important.
Thank you Brenda and Cindy!

In addition to these wonderful sessions, I tried out a few new materials and techniques!
Activa Air Dry Clay - I am now a convert.
It feels just like earthenware clay but has a drying agent.
This is perfect for my Fuller Meadow K-2s, where I have no kiln. 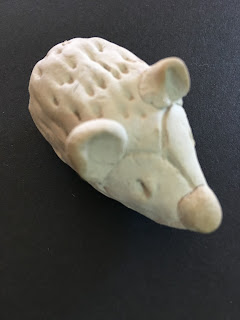 I also tried out 2 new printmaking techniques.
The first was a reflection monoprint print using Lyra water soluble crayons.
I love the rich and smooth quality of the colors. 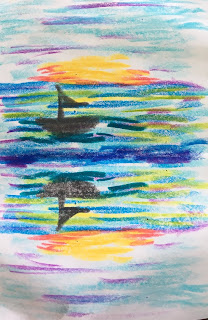 I also tried out a new monoprint technique at the Sargent Art booth.
This technique uses a glue stick on transparency paper or plastic paper sleeves
followed by liquid water colors. I can't wait to try this out with students, they are going to love it! 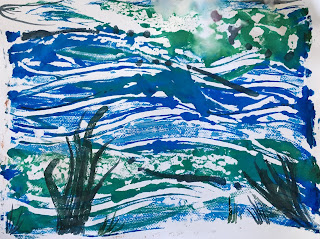 This was truly an incredible conference.  I left inspired and ready to go back to school
and inspire every one of my students.

Peter Reynolds said, "teaching art is not a job, but a mission."
I am so honored to be on this mission!

Posted by Catie Nasser at 10:01 PM No comments:

Second grade artists learned to take their art to the next level with this digital extension of their Swing Scenes.  Learn all about how they created these whimsical self-portraits here!

Second grade artists used this project to become young animators - and they LOVED seeing their art literally come to life.  For this animation we used Stop Motion Studio.  They have a free and paid version.  I have had success teaching students to animate from Kindergarten through upper elementary with this app - it is very user friendly!

After much trial and error, I figured out how to have each students box set up for them like a mini movie set.  This required ALOT of prep!

First I attached a wire to each swing that ran through the back of the box.  This would allow each animator to move their swing to one of 3 positions. 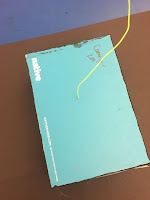 Next, I created a set for each swing scene.  We needed to be able to hide the student animator standing behind the box and block out the background environment around the box. The box is also taped to the base paper so that it can't be moved.  Finally, I also tape the base paper to the table so that can't move!  We took many precautionary steps so that all students could be successful! 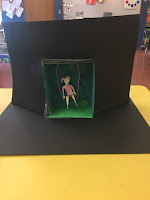 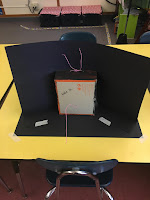 Best case scenario is to have the tables set up before the class walks in the door. However, there are days that I have back to back classes and this isn't possible. 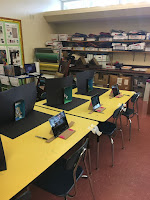 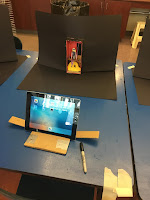 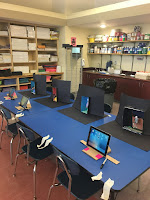 In the cases where I can't have the tables set, I pre-tape the boxes as in the picture above and then set up the iPads and iPad stands on trays to quickly distribute. 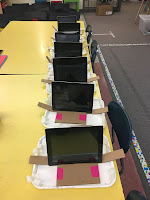 Students worked in pairs and each student had one of two jobs, director or animator.
The director controls the iPad, and the animator is in charge of moving the swing.
Before any animating took place - all students took an oath:
"I will not move my box, I will not pick up my iPad"
(disclaimer: even though we took that oath - their were definitely boxes and iPads moved!)

The director now opens up the Stop Motion App, and sets up their iPad and iPad stand. Once their camera was centered in the correct position, the used the 2 strips of take to secure their iPad stand. Again a good precaution! 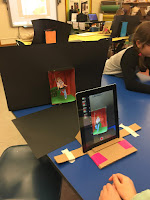 Ok, students were now ready to animate.
We took the first pictures step by step as a group.

These movies are made up of a rotation of 3 swing positions.  First step, animators marked position 1 by making making sharpie mark on their wire when the swing is in position 1 or the base position. After marking position 1, the director takes 1 picture. Animators now move the swing to position 2 by pushing the wire into the box about 1-2 inches and again marking the wire with sharpie. Once swings where in position, the director takes 1 picture.  The same process for position 3.  Then animators come back down following these steps for position 2 and then back to 1. 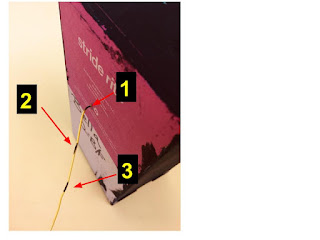 After completing this cycle as a group, I let student teams go on and finish by themselves.
They needed to repeat the process 2 more times.  At the end, movies will be made up of approximately 14-16 pictures. 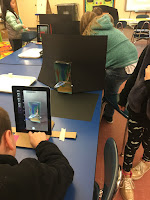 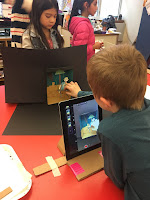 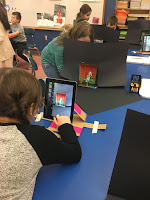 These young animators were so excited to see their movies finished!
Take a look at each classes' finished animations.

Do these movies bring you as much joy as they do me?!

Posted by Catie Nasser at 1:10 PM No comments:

I created this blog as a tool to highlight the importance of art and creativity for children. I hope you are inspired by the possibilities art can create!